Bob Bridgestock was one of the officers who worked on the investigation into the Boarded Barn Cottage Murders and helped bring the perpetrators to justice. The shocking murder of two women in the leafy rural village inspired him to write When the Killing Starts with his wife, ex-police civilian supervisor Carol.

‘This was the one case that stuck with me throughout my career. It was just the most appalling double murder’ – RC Bridgestock, ‘Written in Blood’

Groomed at an early age and trained as criminals by local gangsters, the Devlin brothers get their thrill out of creating fear amongst their victims. They have a macabre pact; not to be arrested or caged.

Written in Blood airs every Sunday at 10pm from 3 September, exclusively on CBS Reality. The RC Bridgestock episode on the Boarded Barn Murders will be broadcast on the 15th October.

On 5th November 1979, two wealthy married women crossed paths with three young thugs. The encounter proved fatal for the women.  Bob was one of the four detectives who worked on the investigation in West Yorkshire and who helped bring the perpetrators who had crossed two counties to commit the crime, to justice. ‘This was one case that stuck with me throughout my career. It was just the most appalling double murder.’ The shocking murder of women in the leafy rural village inspired the feelings, thoughts and shock revelations by the perpetrators to him on their arrest that have stayed with him, to write When The Killing Starts the 7th DI Jack Dylan, with his wife, ex police civilian supervisor Carol.

Superintendent Brooks and his team from Cheshire were baffled as to why the two women had been executed so cruelly. They could see no obvious reason. A robbery that went wrong seemed the most likely answer – but nothing was missing from the house. There didn’t appear to be any motive or reasoning for the heinous crime, and they feared they might be facing a ‘sticker’ – a case that takes a long time to solve. But as so often happens in detective work, the case was solved for them in a week, by fellow officers working on another case in another part of the country.

As 120 detectives in Cheshire worked feverishly to discover any clues to the identity of the Boarded Barn monsters, two uniformed officers in Huddersfield were investigations something far more mundane. PC Gary Dooley and Sergeant Terry Hall were trying to find out who stole two tons of lead flashing worth about £1,000 from the roof of a Hospital, which had been closed and was soon to be demolished. The two officers were sure it would have been disposed of locally and decided to start making enquiries at scrap yards in the area.  An initial enquiry brought them luck. A scrap dealer told them he had recently bought a large consignment of strip lead. The man who brought it in had given a false name, but the scrapyard foreman had jotted down the registration number of his lorry in the purchasing book. Dooley and Hall got a warrant to search the man’s house. Together with Detective Constable Bob Bridgestock they made a through search of his terraced home. It revealed more than they expected. Tucked under a mattress they found a sawn-off shotgun and a box of ammunition. The officers noticed the gun had recently been fired. He was arrested. Bridgestock suspected that the gun had been used in a hold up. The prisoner told them that he was looking after it for his brother. Police throughout the area were alerted as to the brothers details and the search for him began. The detectives didn’t know what he had done, but they knew he had done something. Due to the diligence of the investigators the answer was to come sooner than expected. Within 24 hours the perpetrator was under arrest, after a vigilant policeman saw him getting on a bus in Huddersfield. At the local police headquarters he refused to his questioners as to what he had been doing with the sawn-off shotgun. Leaving him in the cells they raided his flat. Within five minutes they had all the answers they needed. In a drawer they found evidence of his reference library on the crime, edited cassette tapes with radio and TV news broadcasts to include only the details of the murders of the two innocent women. For good measure the officers also found a bag of shotgun cartridges identical to the ones used at Boarded Barn Cottage. 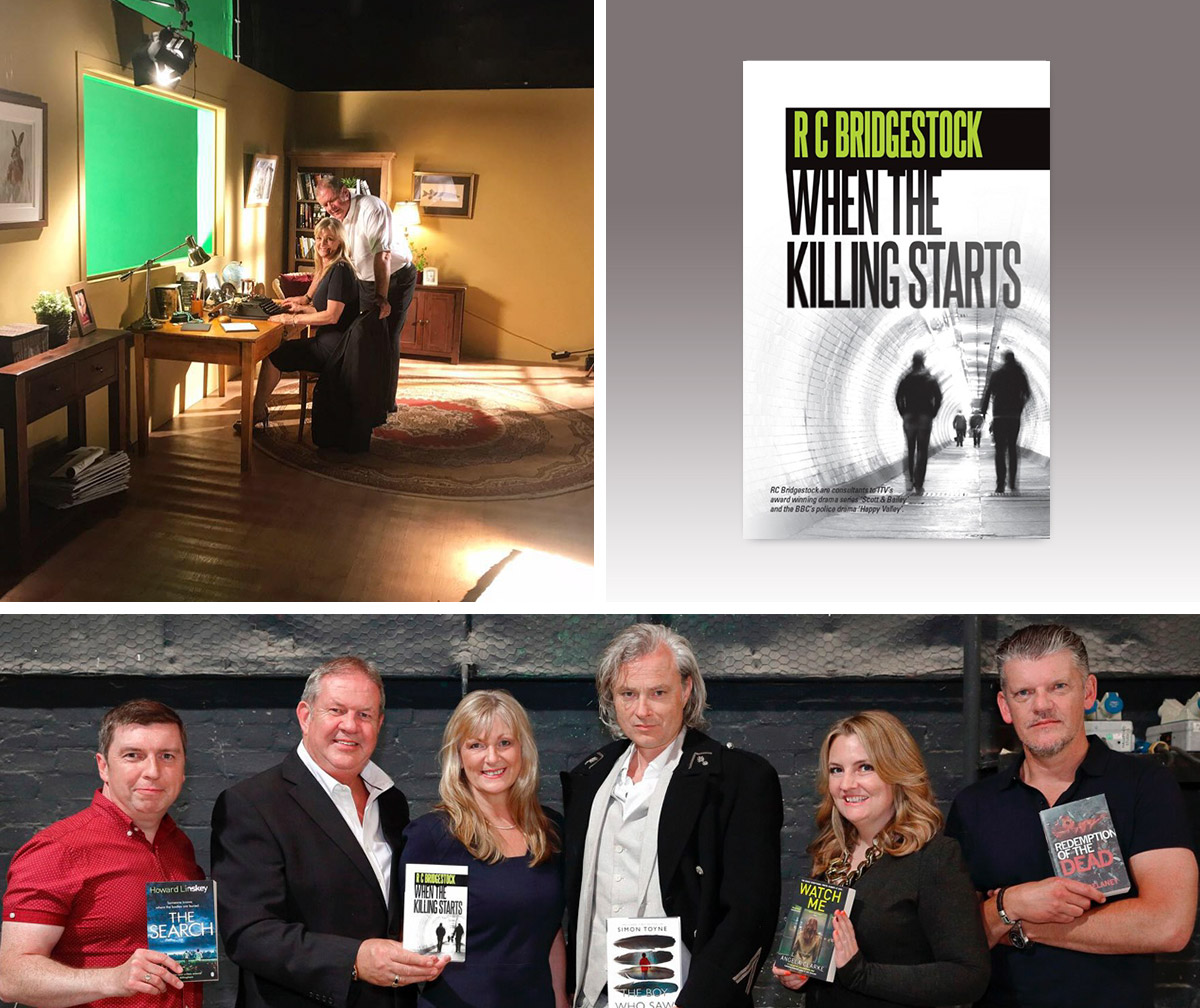 An hour later Superintendent Brooks and his deputies were on their way from Congleton to Huddersfield to interview the prisoner. He may have been proud of his hard image but when questioned and faced with the evidence, he put his head in his hands and burst into tears. Confronted with the details and his obvious involvement, he was quickly confessing all to the detectives, implicating two conspirators.  He even told them where the murder weapons had been disposed of – in the River Calder at Elland.

The next morning at dawn armed police burst into his accomplices’ homes, in Huddersfield. One was pulled from his bed, the other wasn’t at home when they smashed through the glass front door. But, minutes later he was arrested at gun point at his girlfriend’s house in the neighbouring town of Batley.

The next day police divers were deployed to the River Calder where frogmen soon found the second murder shotgun, the replica pistol and clothes discarded by the killers.

Elsewhere more detectives had found out where one of the perpetrators had hired the white Cortina. His signature was on the rental agreement.

The offside rear-light cluster on the car was new. From the batch number police were able to track it back to the garage in Staffordshire where the three had stopped to replace the damaged lights. Scratches on the Cortina’s rear wing, and paint left on the splintered garage door frame at Boarded Barn Cottage were a perfect match.

Again, being faced with the evidence the police had collated against them the two other perpetrators, tough guys who thought they were big-time criminals soon broke down and added their confessions to their partner in crime’s. The perpetrators talked about how they had psyched themselves up for the raid. One told detectives, ‘On the way there I was praying that would be no-one at the house. If there was I knew it would end in murder. We had been talking so much about using shooters and blowing people away we could not back down and lose face with each other.’ And,  ‘They had to die because we had done too much talking in front of them.’ But one of the perpetrators could not suppress his resentment and callousness even when confessing. He told detectives. ‘They are all the same, these so-called society people they have money and everything and can do no wrong. It’s always the little people like me that are in the wrong’.

The Boarded Barn killers went on trial at Chester Crown Count in July 1980. All three pleaded guilty to double murder. They were all jailed for life with a recommendation that they serve a  minimum of 30 years behind bars. The judge, Mr Justice Phillips, told them. ‘These were cruel and brutal murders committed without pity, reasoning or sense. I am going to make sure you all stay in prison until you are very old men indeed.’ One of the perpetrators chose death rather than spend 30 years behind bars. Within 30 hours of being sent down he had killed himself, by setting fire to a mattress in his cell.

Bob Bridgestock, Gary Dooley, Terry Hall and Colin Van Bellan received the much coveted Denis Hoban Trophy for their work on the investigation in 1980.

The Dylan series features fictional character DI Jack Dylan loosely based on Bob, and Jen who likewise is loosely based on Carol. With 47 years of experience behind them the reader gets to feel, smell and sense what it’s like to be the man in charge of a murder enquiry, how the job affects his home life and his family when he’s on a case, and meet some of the bizarre characters you really couldn’t make up!

Written in Blood airs every Sunday at 10pm from 3 September, exclusively on CBS Reality. The RC Bridgestock episode on the Boarded Barn Murders will be broadcast on the 15th October. Find out more here.